LAST DAY to get your August box! Worldwide shipping!
< Back to Blog

Every summer, all over Japan, you can see shops selling kakigōri (かき氷): huge mounds of shaved ice, topped with fruit syrup. This refreshing dessert is the perfect way to beat the muggy summer’s heat. Here’s everything you need to know about kakigori.

Kakigōri is a kind of Japanese shaved ice or snow cone. However, it is fluffier than normal shaved ice, with a texture like freshly fallen snow. For this reason, it is usually eaten with a spoon. Due to its fluffy texture kakigōri is also sometimes called “angel snow” in English. The base of kakigōri is made of pure, unflavored ice, piled high into a mound. This pile of ice flakes can be layered with any kind of sweetener or syrup, from matcha to strawberry to blue Hawaii. Shaved ice desserts can be found all across Asia, under different names and with different textures and toppings, including the Korean Bingsu and the Taiwanese Baobing.

The History of Kakigori

Kakigōri dates back to the Heian era, over 1000 years ago. It is mentioned in the Japanese classic, the pillow book, which was written by Sei Shōnagon, who served in the Heian-era imperial court.  People of that era would save huge blocks of winter ice in special storehouses called himuro. Although by the time summer arrived, two-thirds of the ice would have melted, there would still be enough ice remaining to make cool desserts. These ice blocks were shaved with a knife, then served with sweet syrup. This treat was only available to members of the Japanese nobility of the era, as summer ice and sweeteners were both expensive and difficult to obtain.

It wasn’t until the 1800’s that kakigōri became a popular treat accessible to all. The first kakigōri shop opened in 1869, in Yokohama. Kakigōri was originally made using a hand-cranked machine, which would spin huge ice blocks against a blade to shave off chips of ice. Today’s kakigōri is made using electric ice shavers. However, you might still see street vendors shaving ice with the vintage hand-cranked machines in Japan during the summer.

Where to get Kakigori?

In summer, street stalls at Japanese festivals sell shaved ice. Seasonal shops also crop up around major cities and towns. There are also specialty kakigōri tea houses and cafes that serve the frozen treat year-round. Each cafe has its own unique take on the delicious frozen dessert. One cafe in Tokyo, Cafe Lumiere even sells kakigōri encased in a meringue shell and drizzled with alcohol, which is then lit on fire! Finally, you can buy pre-packaged kakigōri in the ice-cream section at Japanese convenience stores, especially during the hot summer months. 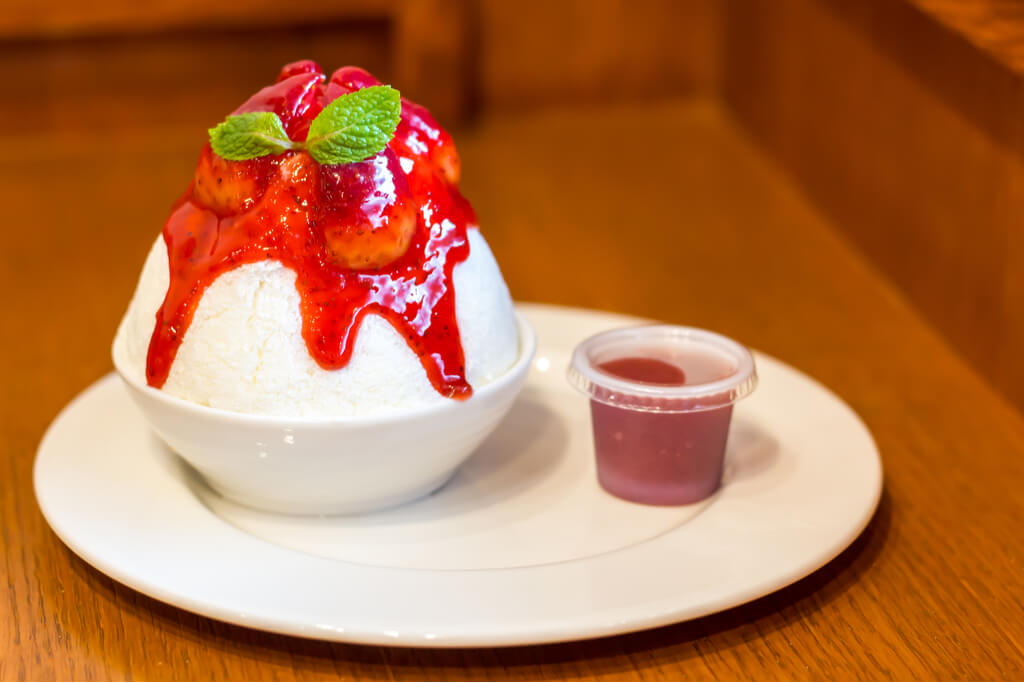 How to Make Kakigori

To make your own kakigōri you will need a kakigōri machine. If you live in the US, a snow cone or shaved ice machine will do as well, although the texture of the ice will not quite be the same.

To top your kakigōri, you can use flavored fruit syrups, jams, condensed milk, or even canned/fresh fruit.

You can also make your own strawberry syrup using this recipe:

1. Combine the ingredients in a saucepan.

2. Bring to a boil over medium heat.

3. Cook until thickened, about three minutes.

4. Let cool before using on kakigōri (otherwise the hot syrup will melt the ice)

Common Types of Kakigōri in Japan

This is a traditional take on kakigōri using ingredients commonly found in Japanese wagashi, like anko (a paste made from sweetened red beans) and balls of mochi (Japanese rice cakes). Sometimes it also includes green tea ice cream. You can find it served at more traditional Japanese tea houses in summer.

Shirokuma means polar bear in Japanese. This frozen Japanese dessert has been popular in the southern part of Japan, Kyushu, since the Edo era. It is a kind of shaved ice drizzled with condensed milk syrup and topped with fruit and mochi.

Yakogori is shaved ice topped with brandy then lit on fire. The kaki is replaced by yaki, which means “to cook with fire” in Japanese. Yaki is also used in the names of popular foods like yakitori, yaki-imo, and yakisoba. Yakigōri can be topped with pineapples, strawberries, fruit syrups, caramel sauce, or ice cream.

Sign up to TokyoTreat using code VACAY to score a Japanese candy bonus!