8 days left to get your October Snack-Tastic Halloween box!

Japan is full of delicious, chocolatey snacks that are bound to satisfy any sweet tooth. With the wide variety of high-quality Japanese chocolate snacks available, you are sure to find something you’ll love. Whether you enjoy your chocolate in regular bar form, inside a crunchy biscuit, or covering a soft sponge cake, there is something for everyone.

For starters, it would be impossible to write about Japanese chocolates without talking about Japanese Kit Kats. First released in Japan in 1973, this chocolate crisp wafer has since seen the launch of more than 100 Kit Kat flavors in Japan alone. According to Kit Kat Japan’s website, Japan is the second biggest consumer of Kit Kats after the UK, where it was initially established in 1935.

The latest, limited edition, seasonal Kit Kat flavors include pudding, summer mango, and maple. If you’re souvenir shopping, there is a special strawberry cheesecake flavor that comes in a Mount Fuji-shaped box. There is a wide range of regional flavors to choose from, such as Hokkaido azuki (Japanese sweet red bean) & strawberry, Shinshu apple, and Amaou strawberry from Kyushu. There is even a premium range of  Kit Kats infused with sake (Japanese rice wine), created in collaboration with different breweries across the country.

Paying a visit to one of Japan’s specialty Kit Kat Chocolatory stores will introduce you to even more limited edition Kit Kat flavors that you won’t spot in any convenience stores. Some of the stores even offer scrumptious snacks inspired by this much-loved chocolate bar, like Kit Kat Waffles. Some also offer create-your-own Kit Kat experiences.

Royce’, another well-known Japanese chocolate brand, launched Royce’ Chocolate World, which is a chocolate factory, specialty store, and bakery inside the New Chitose Airport in Hokkaido. Here, you will find more than 200 different kinds of Royce’ chocolate.

Craving some chocolate from Japan?! TokyoTreat is sending Japanese Snacks straight from Tokyo to your door - sign up today and experience the wild side of Japan!

The brand, whose offerings include chocolate-covered salty potato chips and marshmallow chocolate snacks, is well-known for its boxes of creamy, smooth Nama (fresh) Chocolates, which are available in 10 different flavors (five of which contain alcohol). Royce’ also has a delicious range of chocolate bars in seven flavors, including almond bitter chocolate, rum raisin, and creamy milk chocolate.

The chocolate bars and snacks produced by Meiji are another great example of high-quality chocolate in Japan. Meiji, which launched its first chocolate in 1918, now has nearly 130 chocolate products. This includes the iconic Meiji milk chocolate bar.

According to Meiji’s website, the production process and flavor of this ever-popular chocolate bar has hardly changed since it was first launched 95 years ago in 1926. If you buy a pack of Meiji Best 3, you’ll get mini versions of this chocolate bar, along with two other top-selling flavors, Hi milk and Black.

The brand also launched the award-winning Meiji THE Chocolate, made up of a range of different ‘bean-to-bar’ products that use beans directly from growers in Venezuela, Brazil, and the Dominican Republic.

People also love their popular almond and macadamia chocolate balls, their cubed Meltykiss and Hi Milk Cubie options, and the capsule-shaped Galbo bites. However, they are also well-known for their mushroom-shaped Kinoko no Yama (mushroom mountain) and bamboo shoot-shaped Takenoko no Sato (bamboo shoot village) chocolate snacks, both of which feature a crunchy cookie base covered in milk chocolate.

Another popular chocolate snack is Glico’s Pocky, a chocolate-covered biscuit stick originally launched in 1966. What started with a simple chocolate flavor has since expanded to include more than 50 flavors, from strawberry to cookies & cream. You’ll even find heart-shaped Pocky, Pocky Midi (a shorter stick covered in thicker chocolate), and DreamPocky, which features five different flavors in one box. 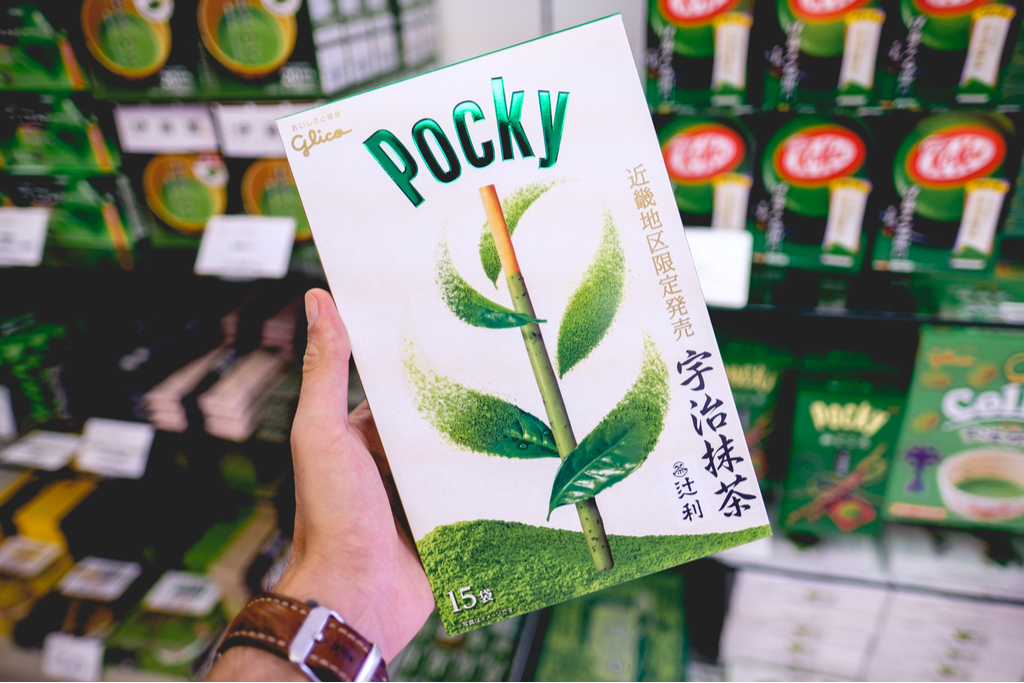 There are limited-edition releases, as well as seasonal and regional Pocky flavors, the latter of which include options like Uji Matcha (powdered Japanese green tea), Tokyo Amazake (Japanese sweet rice wine), Sato Nishiki Cherry, and Gorojima Kintoki Sweet Potato. In June 2021, Pocky released a choco-mint variation that will only be available over the summer. Pocky is so popular that there is even a Japanese party game surrounding it, the Pocky Game.

Lotte’s Toppo is another popular chocolate stick. However, instead of a chocolate coating, there is a chocolate filling instead, like a reverse Pocky. It’s available in flavors ranging from bitter dark chocolate to butter caramel. 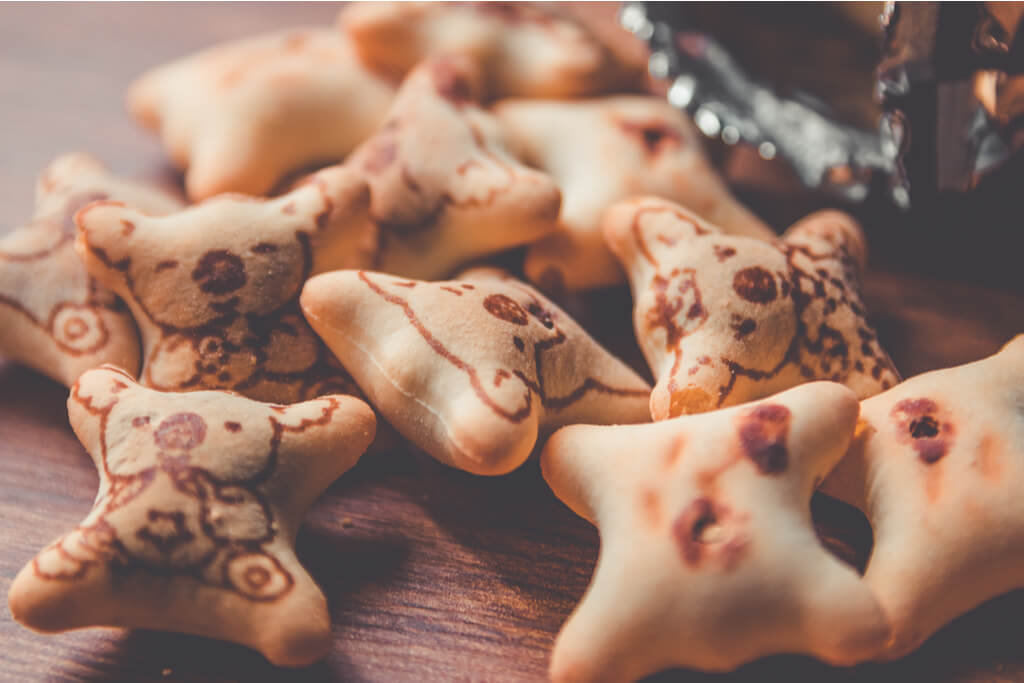 One of Yuraku’s most popular chocolate snacks is the crispy rice puff-filled Black Thunder, which originally launched in 1994. The bars come in flavors ranging from strange flavors, like fermented butter and corn potage, to traditional Japanese flavors, like matcha azuki and hōjicha (Japanese roasted green tea) latte.

A year earlier, in 1993, Morinaga launched DARS bite-sized milk chocolates, which are currently available in five flavors, including white chocolate and green tea. The brand is also known for its Chocoball range, a round treat featuring a thick chocolate covering and fillings ranging from crunchy peanut to creamy caramel.

TIROL, which has a wide variety of sweet treats, is well-known for its small chocolates that come in a wide range of different flavors, some of which are limited edition. Think strawberry jelly, coffee nougat, kinako mochi (sweet Japanese rice cake covered in roasted soy bean powder), and Puré Lemon.

The range of Japanese chocolate snacks doesn’t stop there. If you love dorayaki (Japanese red bean pancake), you might want to try Yaokin’s Dora Choco, if you haven’t already. This pancake-like snack, which comes in packs of two, is filled with a delicious chocolate cream instead of the traditional red bean center.

Meito’s Puku Puku Tai is a crispy taiyaki (Japanese fish-shaped pastry)-inspired treat filled with an airy chocolate mousse, while Furuta’s Mugikko Chocolate is made of barley puffs covered in a delicious milk chocolate that comes in very cute packaging.

You can find countless more chocolate snacks in convenience stores and supermarkets across Japan and online. Which Japanese chocolate is your go-to snack? Let us know in the comments!