8 days left to get your October Snack-Tastic Halloween box!

Lotte is well known for its Choco Pies, a chocolate-covered cake with a fluffy marshmallow filling. They also produce Toppo, a chocolate-filled biscuit stick snack. Toppo is like a reverse Pocky, with the chocolate on the inside and the biscuit on the outside! Lotte’s Ghana chocolate bars are great too. They’re delicious, made with high-quality cacao beans, and only cost 100 yen (about 1 USD).

While Nestle as a whole is a brand from Switzerland, we have to mention the company’s Japan branch, which turned Japanese Kit Kats into a global phenomenon. Nowadays, there are so many amazing and strange Japanese Kit Kat flavors for people to explore and enjoy.

If you love Japanese chocolates, then you’ll love TokyoTreat’s monthly subscription box, which sends you all kinds of delicious Japanese snacks and sweets to try every month!

Meiji’s most well-known snacks in Japan include an array of chocolate-covered nuts, including chocolate hazelnuts, macadamia nuts, and peanuts. They are also the producers of the two forest-themed “Kinoko no Yama” (mushroom of the mountain), and “Takenoko no Sato” (bamboo shoot village). As their names suggest, one snack is a mushroom-shaped cookie with a chocolate cap, while the other is a cookie shaped like a bamboo shoot dipped in chocolate. The two snacks’ similarities and differences have sparked a viral internet debate about which is best, mushroom or bamboo!

Ezaki Glico is a Japanese food company based in Osaka. Its logo, called the Glico Running Man, is even a famous Osaka landmark. The logo is projected on a giant neon sign which hangs over the Dotonbori canal. Glico is famous worldwide for its many inventive Pocky flavors, but the brand also makes a type of chocolate you might not have heard of before.

Glico’s GABA is a chocolate enriched with 28 milligrams of γ-aminobutyric acid (GABA) in every 10 grams of chocolate. GABA is a neurotransmitter that plays an important part in reducing stress in the human brain, so eating this chocolate is supposed to reduce stress. Then again, if you’re a chocolate lover, delicious chocolate probably always reduces stress on its own!

The company’s Country Ma’am cookies are the number one best-selling snack in Japan. The cookie’s popularity is due to a unique baking process that results in a crispy exterior and moist interior. Their most popular range of chocolates are called “Look”. These chocolates have many different flavored fillings, ranging from fruit to cheesecake! Fujiya is also the producer of the Milky array of candies, cookies, and chocolates, which are decorated with an adorable girl mascot named Peko-chan.

Morinaga is one of the largest Japanese candy producers. This brand has been producing chocolate in Japan for over 100 years. Their staple chocolates are called Dars and come in milk, dark, white, strawberry, and other limited edition flavors. Other popular sweets produced by them are Choco Flakes (corn flakes coated in chocolate) and Choco Balls (chocolate balls filled with caramel, peanuts, biscuits, and many more).

Outside of Japan, the brand is particularly well known for its Hi-Chew brand of candy. These chewy candies come in many flavors, including special regional flavors for each of Japan’s prefectures, like Okinawa’s shikuwasa citrus.

The Black Thunder candy bar is this brand’s most well-known offering. The bar is named Black Thunder after the Japanese god of thunder, Raijin. It is made of a layer of crunchy cookie coated in black chocolate. In Japan, you’re more likely to spot this candy bar in stores, than you are a Snickers or Twix. 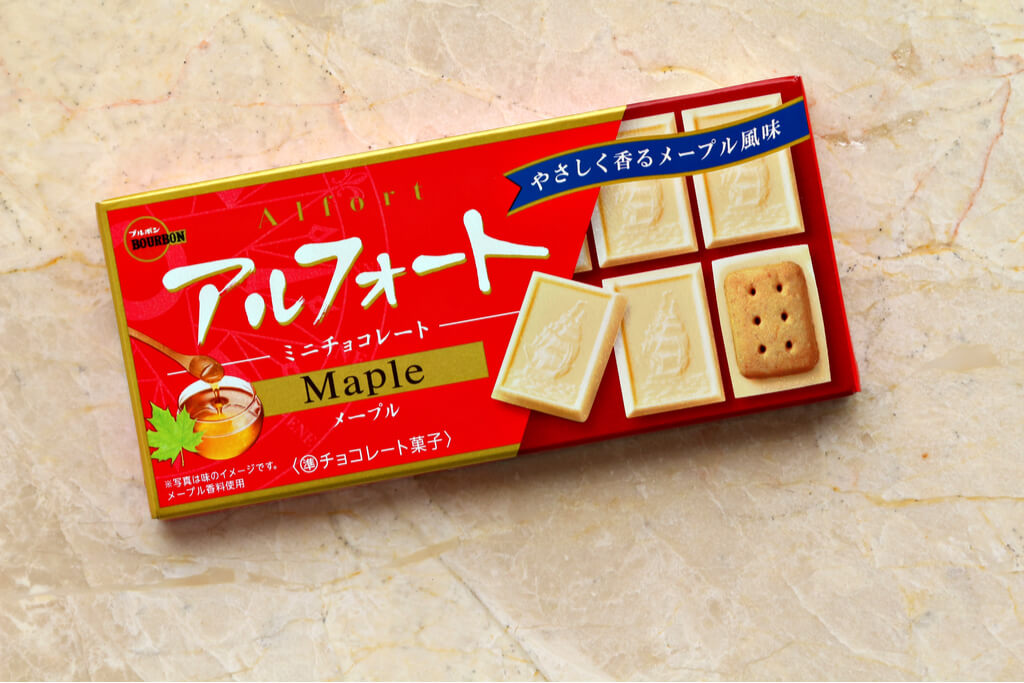 Tirol sells tiny squares of chocolate in individual packages, usually found near the registers of Japanese convenience stores. These little chocolate squares are perfect for a quick, sweet snack when you don’t want to purchase an entire bag. They come in varied and constantly changing seasonal flavors, including sakura mochi (which actually has mochi inside the chocolate), amazake (a sweet Japanese fermented rice drink), and many more!

While it shares the name with a type of alcohol, Bourbon is actually a Japanese company that produces chocolate and other sweets. The company is best known for its Alfort biscuits (biscuits layered with chocolate), sour-sweet Fettuccine gummies, and Petit biscuits. It is also the producer of the French-inspired Rumando, or Lumonde, which are light, crispy cookie sticks enveloped in milk chocolate. These cookie sticks were so popular that they have been sold in Japanese stores for over 40 years.

Royce originated in Sapporo, the capital of Japan’s northernmost island, Hokkaido. Hokkaido prefecture is famous for its high-quality dairy products. Because of the freshness of the brand’s ingredients, the Nama (fresh) chocolates are one of their most popular. These chocolates are made with locally-sourced, fresh cream, and have a soft, ganache-like texture. Their green tea chocolates and their chocolate-dipped, salty potato chips are also sold in 14 countries around the world.