2 days left to get your October Snack-Tastic Halloween box!

What is the Best Japanese Candy? Japan’s Most Popular Sweets

Japan has tons of candy to choose of all types to choose from. But what is the best Japanese candy? Of course, that depends on what kind of candy you prefer! We’ve compiled a list of 11 of the most popular Japanese sweets and candies classified by type to help you find your personal favorites!

The Most Popular Japanese Candy Internationally

By now, who doesn’t know the famous snack Pocky? These sweet sticks are one of the best Japanese chocolate snacks and practically a global phenomenon, which can now be found in supermarkets all over the world. These biscuit sticks, dipped in a creamy, flavored coating, are absolutely worth the hype.

They’re so snackable, you can finish a pack in mere minutes! Plus, Pocky are not only delicious, they’re also super easy to eat, with the bottom part of the stick left uncoated, to make them easier to hold. Not to mention, there are so many tasty Pocky flavors!

Wondering where you can get the best Japanese candies? TokyoTreat’s sends a curated selection of Japanese candy and snacks, many you’d never see outside of Japan!

Green tea-flavored Kit Kats are the other quintessential Japanese candy known around the world  —  even though Kit Kat isn’t a Japanese brand! They’re not just popular outside of Japan. Packs of green tea, or matcha, Kit Kats can be found in all major grocery stores all over Japan.

These Japanese Kit Kats are fan favorites for good reason. The creamy, slightly bitter green tea flavor is much lighter and more refreshing than the usual chocolate coating.

This Japanese candy is chewy like chewing gum. However, unlike gum, it’s a little firmer, and you’re actually supposed to swallow it. This chewy Japanese snack comes in a variety of flavors like peach, grape, ramune, and cola. Hi-Chew is also famous for having special flavors for every prefecture in Japan, from Hokkaido melon to Fukuoka strawberry.

Milky are chewy candy balls, with a rich, creamy flavor. These caramel-like milk candies have a long history, first being produced in 1951. Their longstanding success is due to the high quality of ingredients used to make them, including milk from Hokkaido and natural spring water from Mt. Fuji.

The Most Popular Japanese Gummy Candies 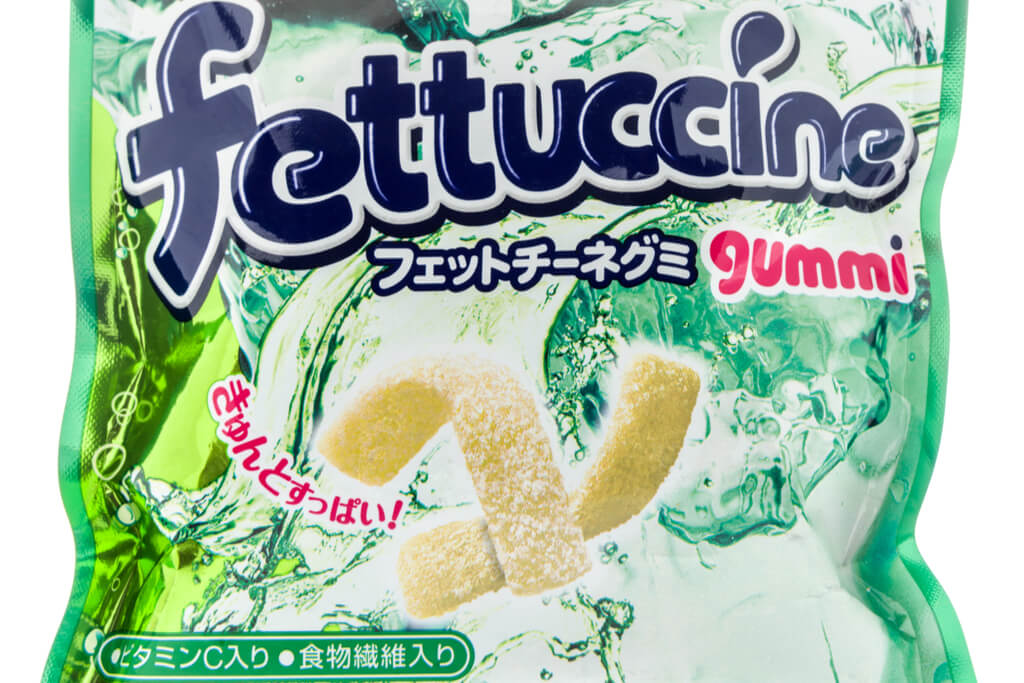 Fettuccine gummies were inspired by Italian fettuccine pasta, hence their flat, thin shape and name. The gummy candies come in many different flavors, including cola, grape, lemon, peach, and kiwi. What makes them stand out from other Japanese gummies is their sweet and sour outer coating. The hint of sourness and acidity is simply mouthwatering!

The motto of these gummies is “like eating real fruit”. True to the motto, Meiji Kajyu gummies are made with 100% fruit juice and have no added artificial coloring. They come in a rainbow of fresh fruit flavors, including green muscat grape, strawberry, white peach, kiwi, and orange.

These sweets are as fun to make as they are to eat! Popin Cookin is a Japanese gummy-making kit. But you don’t just make everyday gummies. Most Popin Cokin kits show you how to create gummies in the shape of real meals, like sushi, hamburgers, and omelets!

Fortunately, while the gummies look like savory food, the actual flavors are fruity and sweet. Most of the gummies also have added calcium, so even if they’re not actually a whole meal, there’s a bit of nutritional value to them!

Konpeito are hard candies that look like little, pastel stars. They were first introduced to Japan when the Portuguese brought hard candy-making techniques over in the 16th century. At the time, because sugar was rare and expensive, konpeito were reserved only for the upper classes.

Today, these beautiful sweets are fortunately much easier to buy, especially in Kyoto, where traditional konpeito making shops still stand. The candy maintains its valued origins though, as boxes of it are the official welcome gift given out by the Japanese Imperial family!

Daifuku are a kind of wagashi, a set of traditional Japanese sweets. They are balls of mochi (a sticky Japanese rice cake) with an anko (sweet red bean paste) center. These traditional sweets have been popular in Japan for over one hundred years and can even be found in convenience stores based on the season.

Daifuku can be filled with much more than just anko though. Other popular fillings include strawberries, cream, and custard. This delicious treat is one of the top 10 wagashi Japan has to offer.

Meiji’s Meltykiss is the softest, silkiest milk chocolate you’ll ever try. They are so soft that these chocolates are only sold during the Japanese winter because they melt too easily in the summer. This Japanese chocolate is coated in cocoa powder, with fillings in multiple flavors, including matcha, vanilla, and strawberry.

This is Japan’s most popular candy bar and is known as Big Thunder in some other countries. It is made with a mix of rice puffs and chocolate cookies, all enveloped in a layer of milk chocolate. It also comes in a variety of flavors, like Hokkaido butter, apple pie, or matcha. The name was inspired by the Japanese God of Thunder, Raijin. Maybe that explains why it’s so divinely delicious!